This geocoin is the personal geocoin of Geocache Land's Owner Ian and designed by Jon-Paul Barr. As well as his own personal version (only given as a gift) Ian produced five versions of the coin for public sale. The first version was released as a pre-sale only coin and has sold out. Four other versions are available exclusively from Geocache Land.The front of each version of the geocoin shows a young child looking out of the window of his bedroom in the early hours and seeing the dragon of his dreams flying above the rooftops on a starry night.

The clock tower is lit by the Celtic Knot-work moon and shows the time as 1.50am, the time most children will be in R.E.M. sleep (the time when we dream).

This side of the coin uses hard enamels

The reverse of the coin shows the dragon known as Fire-Drake between two Celtic knot-work columns.

In Middle English, drake means 'dragon,' following the Old English drake, which means 'dragon, sea monster, or huge serpent.' Drake likely relates to the proto-Germanic drako as well as the Latin draco, both meaning 'dragon.' These tie back to the Ancient Greek word drakon, believed to come from drakein or derkomai, 'I can see clearly.'

The words dragon and drake separated around the thirteenth century when drake became an archaic Old English word that means dragon. The term drake has been used mostly in Europe and North America, although this types has a particular shape fitting to other dragon species beyond that region. The drake is a dragon with four limbs, much like a lizard, although usually far larger in size than the average lizard.

Beowulf was a warrior who had battled many monsters in his youth, two of which being Grendel and Grendel's mother. As he grew older, be became the King of the Geats, and his legend grew. An epic poem, which is indeed historical in some respects, was written containing the story of his struggles with monsters, one of which was the Fire-Drake.

The Fire-Drake was a fearsome dragon that lived in a cave guarding a large horde. Someone crept into the dragon's lair and stole a cup. The dragon awoke and found that his treasure was indeed missing a cup, so it searched for it. It discovered human foot steps, which allowed the dragon to learn who stole the cup: humans. With that, the fire-drake took to the skies and began tormenting a nearby town.

Beowulf, the King, was informed of this creature's wrath, and he, as the legend and the king, was asked to slay the beast. He took with him men, but in the end only one man, Wiglaf, helped him. They went to the dragon's lair, and Beowulf began to fight the mighty monster.

Unfortunately, the Fire-Drake had a good deal of fiery breath, which made it hard to fight. Beowulf's sword, Naegling, broke during the battle, which made Beowulf quite helpless and he was bitten by Fire-Drake. Beowulf did not die right away, but lived to see the dragon slain with the help of Wiglaf, his relative. However, he died later because of the poison.

The dragon is finished in hard enamels and the Celtic Knot-work is in soft enamels.

Existence LE (30 made) - White dragon on Satin Gold. The white dragon is historic symbol of England and predates other religious based symbols. The dragon is white pearl enamel with rainbow glitter wing and black glitter scales.  The Celtic knot-work columns represent Scotland and the gold finish represents Leadhills, the village where he lives, as the worlds purest gold is found in Leadhills at 23 karat! The columns are finished in glow enamels. 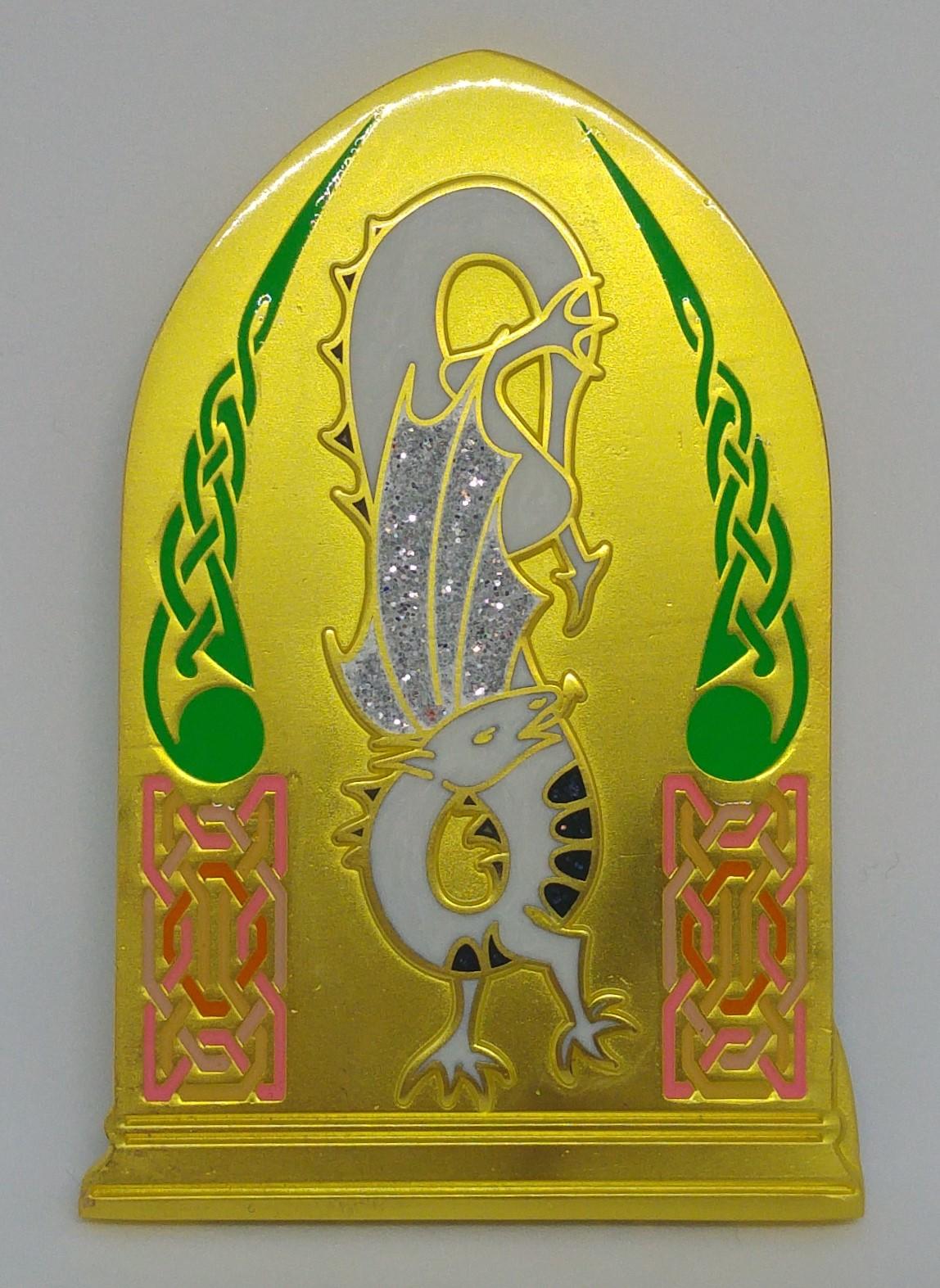 Lightning RE (45 made) - Green dragon on Antique Copper. The dragon features glow in the dark hard enamels with black Celtic knot-work. 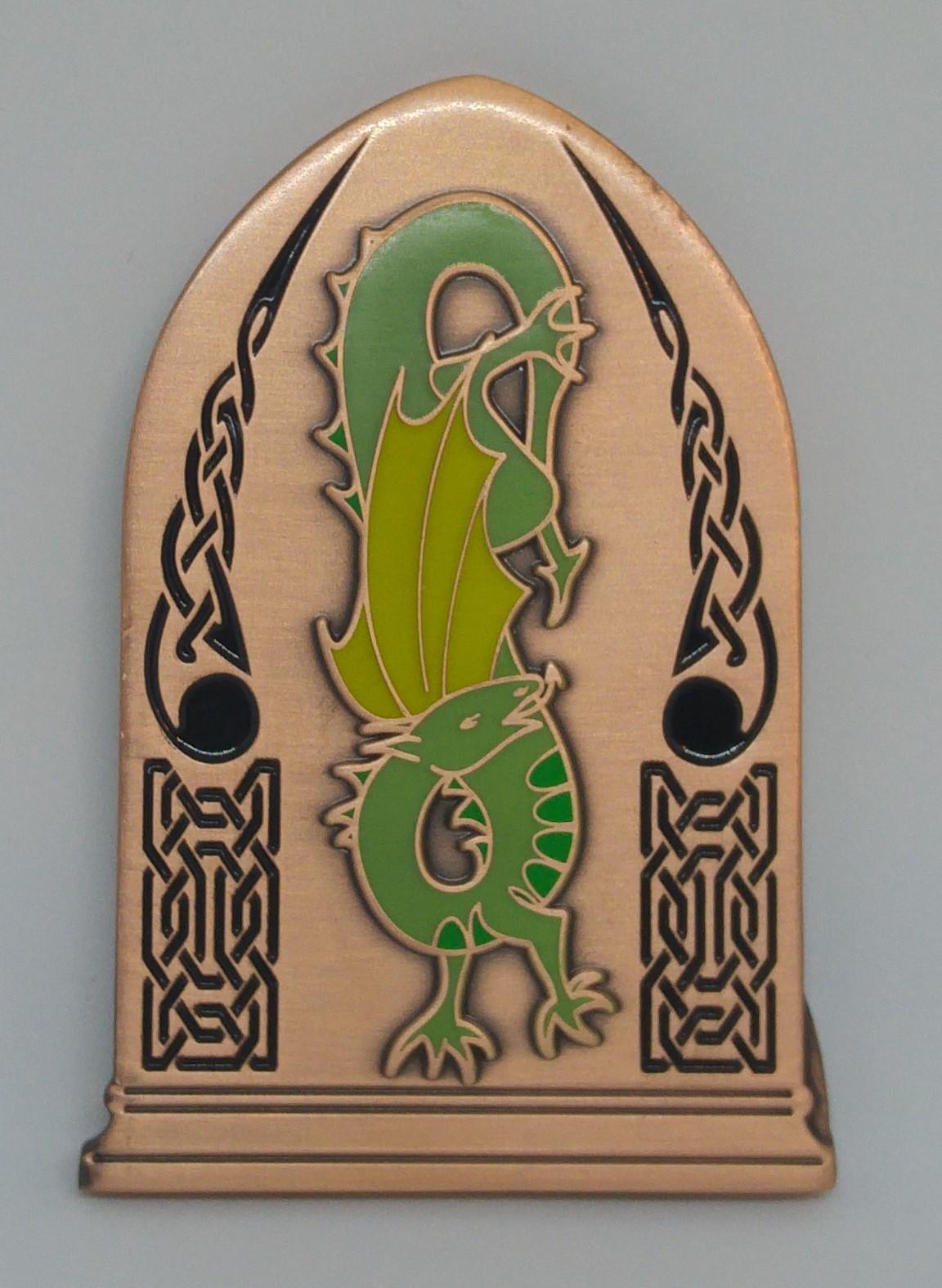 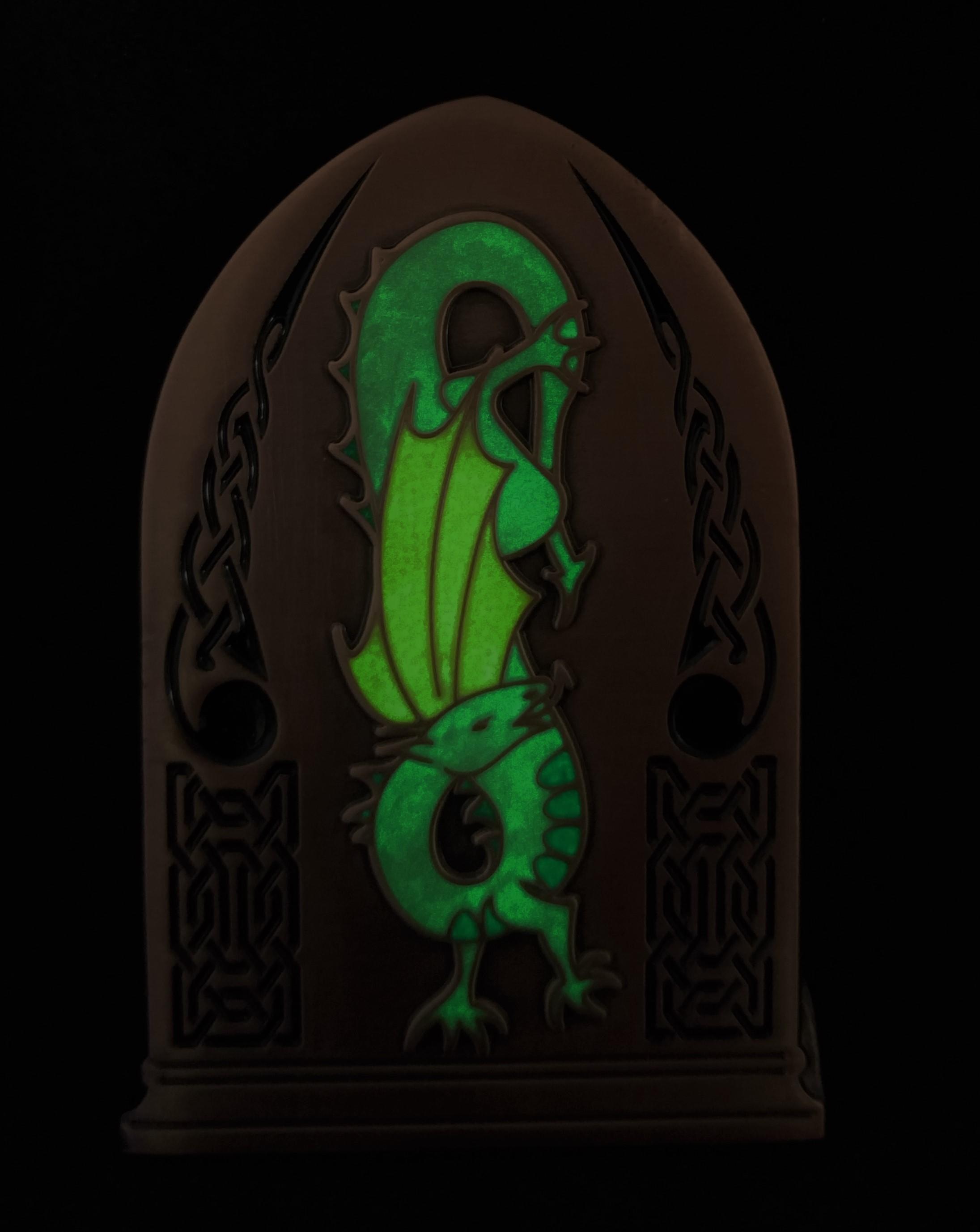 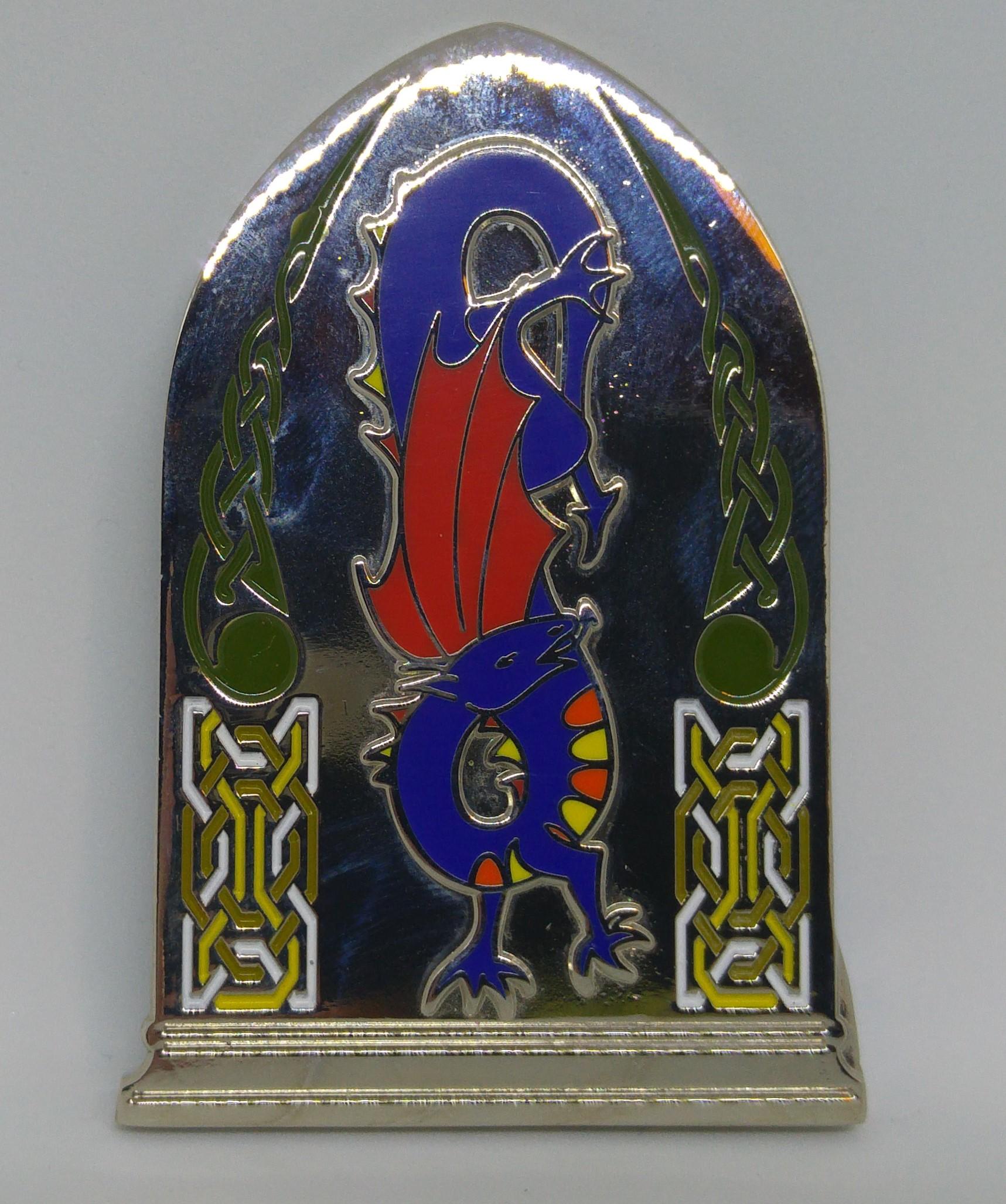 Fire and Ice XLE (25 made) - Green dragon on Brushed Nickel. The red wing represents the fire and the white and grey knot-work represents the Ice. There is a hidden secret to this coin. Can you find it? 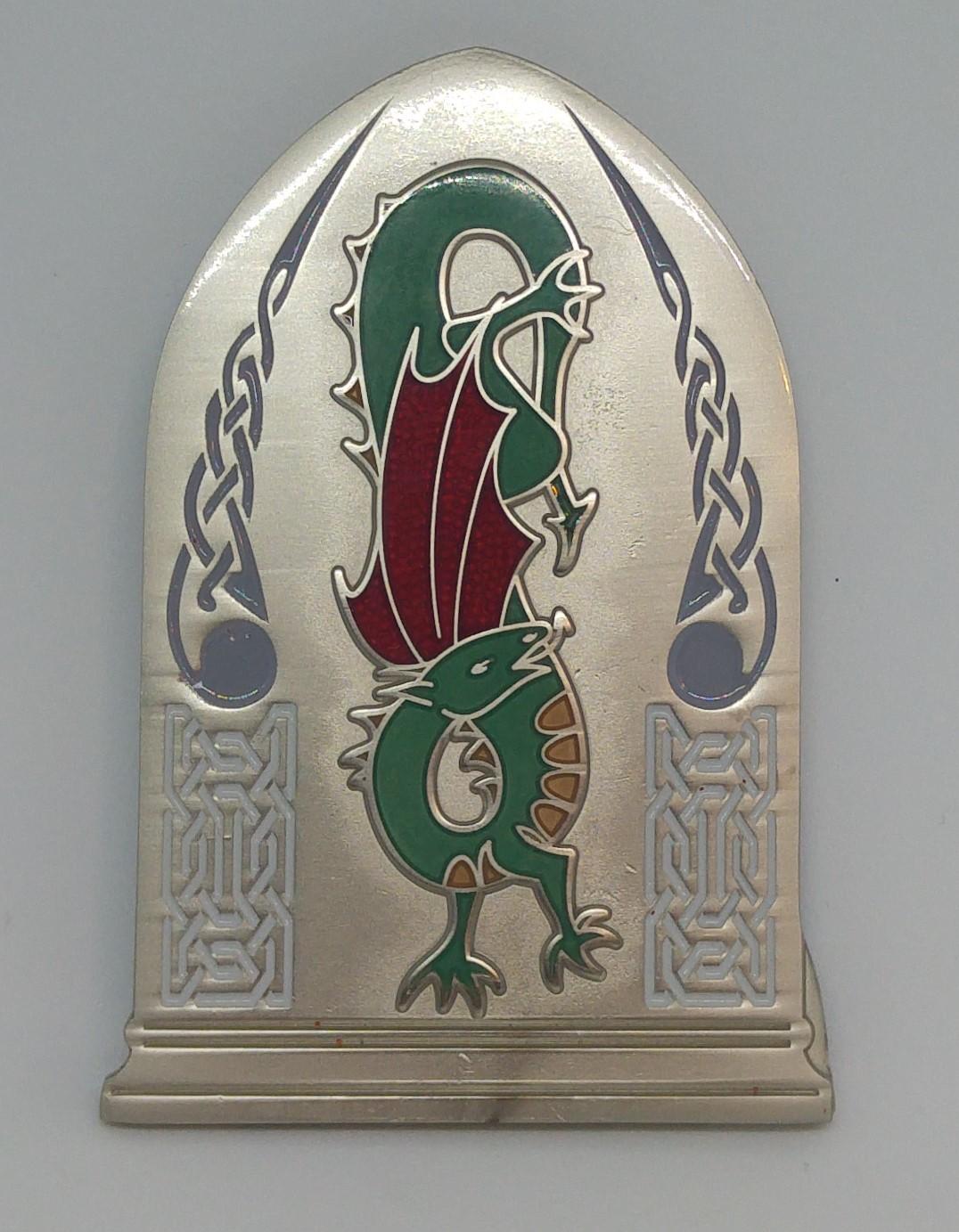 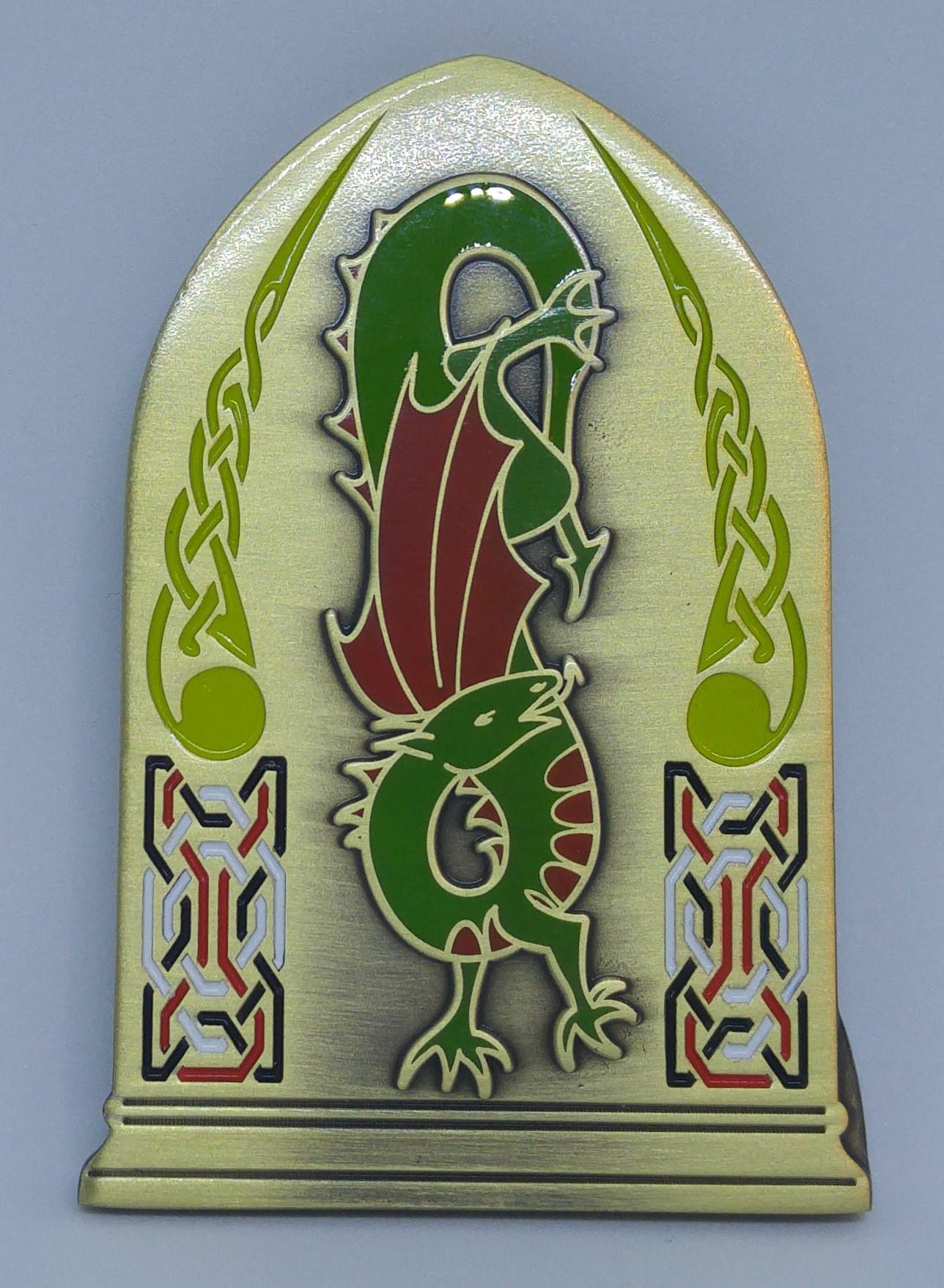 Other versions (not for sale):

Personal (20 made): Only available from Ian as a gift or trade.

Secret: Just 10 of this version exist! As the name suggests it is a secret edition and so until now  there have been no pictures. Distinctively different from the other versions this coin holds its own special hidden feature within the design. Only available as a gift.

This is a 3for2 offer item. Add any 3 items in this mix and match offer to your cart and the cheapest item will be free.